Spotfire
Spotfire is a software that allows you to manipulate, analyze and display your data. The display of the data is what we call the dashboard. Spotfire has a built-in tool that allows you create and execute scripts the way you would in other programming software such as R. Furthermore, there are many ways you can display data on Spotfire. For example, you can display data through tables, plots, pie charts, and bar charts. This software can do almost everything that Microsoft Excel can do. However, Spotfire will not accept Excel files as input files; it only accepts CSV files.
We have utilized Spotfire for many different purposes in this lab. We use it to display quality control reports of the data on SPReD. We also use it to organize and filter the information that we gather from SPReD. Spotfire is also being used to provide data release status updates for ONDRI leads.
XTxGate
XTxGate is a middle-ware server providing a variety of services to support BrainCODE which include:
Brain Imaging Data Structure (BIDS)
Brain Imaging Data Structure (BIDS) is a new standard for organizing neuroimaging and behavioural data. Prior to the definition of BIDS made standard by neuroimaging world-leading scientists, researchers had different layouts for arranging the brain imaging data obtained in different experiments. Inconsistency in data structures was leading to misunderstanding and extra work on adjusting the scripts for a certain data type. Therefore, most neuroimaging organizations are moving toward adopting BIDS as their standard of data sharing and storage. The Strother lab, as manager of the
Brain-CODE informatics pillar, is working on converting the current Brain-CODE neuroimaging database into BIDS format. We are also developing a robust pipeline for our primary data-management platform, namely XNAT, to automate the conversion of data directly from XNAT to BIDS.
Neuroinformatics and Biostatistics (NIBS)
​Many members of the Strother Lab are part of the Neuroinformatics and Biostatistics (NIBS) platform for the Ontario Neurodegenerative Disease Research Initiative (ONDRI).  The NIBS team is responsible for harmonizing data across the measurement platforms within ONDRI (neuroimaging, neuropsychology, genetics, clinical, eye tracking, ocular imaging, gait & balance). The NIBS team also contributes to and develop tools to store, manage, process, provide quality control (QC), and distribute ONDRI data.  One of the most active current projects within the NIBS team is the development of a comprehensive battery of multivariate outlier detection techniques. These techniques play a critical role in the QC to identify potential sources of errors in the data, and to identify observations with unique patterns. Additionally, the NIBS team also develops and implements analytical and statistical tools for complex, multi-modal, and large scale data.

​OPPNI-fMRI
OPPNI-fMRI (Optimization of Preprocessing Pipelines for NeuroImaging-fMRI) is a software package developed in the Strother lab, which does fast optimization of preprocessing pipelines for BOLD fMRI (Blood Oxygenation Level Dependent functional MRI). It identifies the set of preprocessing steps (“pipeline”) specific to each scanning session/run, which optimizes quality metrics of Prediction and Reproducibility for post-processing analysis results (Strother et al., 2002, 2004). This procedure has been shown to significantly improve signal detection, reliability of brain activations, and sensitivity to brain-behaviour correlations (Churchill et al., 2012a, 2012b). The package can also be used for simple automated batch-processing of fMRI datasets if no appropriate analysis model is currently available to do optimization (e.g. some resting-state connectivity studies).
The OPPNI package is currently being distributed and maintained via GitHub. If you would like to use or know more about OPPNI please contact one of the OPPNI developers (by emailing Pradeep at praamana@research.baycrest.org).
Phantom QA Project
​Resting-state fMRI quality assurance (QA)
In any longitudinal multi-site study it is crucial to ensure comparability of data collected at different sites and over different sessions. In this study we regularly scan a phantom at twelve sites across Canada to investigate between- and within-site MRI scanner instabilities. The phantom is a spherical plastic phantom filled with doped agar gel (the fBIRN phantom), which is scanned approximately monthly at each site using the resting-state fMRI (rs-fMRI) sequence of the Canadian Dementia Imaging Protocol. The goals of this are (1) to identify scanner variations within- and between-sites, (2) to identify sources of variability, (3) to identify preprocessing approaches to minimize the impact of variations, and (4) to translate findings on phantom data to human studies. This study is defined under the Ontario Neurodegeneration Research Initiative (ONDRI) and the Canadian Biomarker Integration Network in Depression (CAN-BIND).

​Simultaneous EEG-fMRI
Simultaneous  acquisition of Electroencephalography (EEG) and functional magnetic resonance imaging (fMRI) enables studying of brain function with high spatial resolution of fMRI and high temporal resolution of EEG. The complementary characteristics of the two modalities have made simultaneous EEG-fMRI into a rapidly growing neuroimaging technique with a wide range of cognitive and clinical applications. Despite major improvements during the short history of EEG-fMRI, several technical and methodological challenges still remain. Part of Nasim Sham's research is focused on evaluating and improving MR related artifacts in the simultaneously recorded EEG data. Another open question in the field of EEG-fMRI is the optimal choice of measures and techniques for data integration. To address this question, she is investigating the application of multivariate techniques for EEG-fMRI data integration. Nasim is currently applying these techniques to explore the relationship between various aspects of the brain’s electrophysiological activity (i.e. the transient evoked activity, oscillatory evoked activity and spontaneous oscillatory activity) and the associated hemodynamic response in the context of sensory and cognitive (memory) processes of the brain. 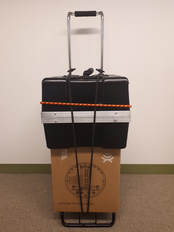 The Toronto Dementia Research Alliance (TDRA) platform will create a database for research studies embedded in clinical care through development of a unified approach for diagnosis and charting of the natural history of pure and mixed dementias, along with the impact of co-occurring disorders. This project brings together leading TDRA clinicians and investigators in cognitive evaluation and management of subjects with neurodegenerative and vascular cognitive disorders drug development, clinical trials, epidemiology, health services, statistics, neuroinformatics and brain imaging. The five University of Toronto affiliated hospitals that house memory clinics comprise the TDRA, where approximately 6,000 patients are seen annually (2,000 new patients and 4,000 follow-up patients). The initial outcome will be a database of patients seen across the TDRA memory clinics, at time of first assessment and then at follow-up, with plans to expand to other centers in Ontario and nationally.
For list of publications please click here.
Proudly powered by Weebly